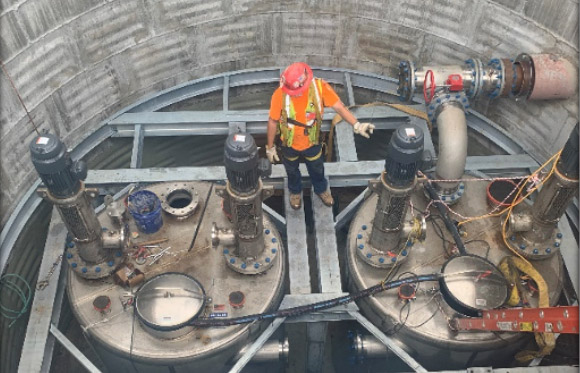 We have all seen our culture wheel and we have discussed it several times.  There are multiple reasons how and why we got to the parts of the wheel.  I will not bore you with those details I am going to show you multiple examples on how you have already shown our customers and the world they are true.

We took a job at Merck to dig a shaft for a vault.  The project quickly turned to pouring the vault in place.  Tying rebar, forming interior wall forms, water stop for seals, and much more.  This is not something TKT has done before and the faith Brian had in our people to figure it out was unshakeable.

Merck safety team consistently changed their protocols because the work we performed had never been done on site.  Our team dealt with permits taking hours to get and safety concerns that were unrealistic for the work we perform.  Not only did our team deal with it, we received glowing compliments on how well we dealt with the changes and our willingness to make safety a priority.

B – Do It Right the First Time / Never Surrender

Because the first vault was such a success for Merck we were contracted to perform another one.  Not only did we have another shaft to dig and vault to pour.  Now Merck added platform steel and steps to install.  We worked directly with Jenmar to design a grating system with hatches and stairs to create a multilevel system so Merck could inspect, change out, and even repair all tanks, piping, and valves.

Not only did the team that worked on Merck work through the adversity of the Merck bureaucracy but dealt with a GC that had no real understanding of what we were doing and how much space we would need.  The team had to schedule our needs with Merck and Mathers to even have space to get trucks in to work.  Gary and our TKT team rose to the challenge of finding a better way to do our work in half the space and ended up becoming very productive at it.

Our success was contagious for the people at Merck.  They kept adding work to our field because they were so impressed with how well they performed.  Our team consistently completed milestones ahead of schedule so much, that we were politely asked to slow down.  TKT continued to set the bar high and people on site took notice.

These are just some examples of how well our TKT field team excels with the work, owners, and GC’s.  Great job gentleman.  Keep up the good work.